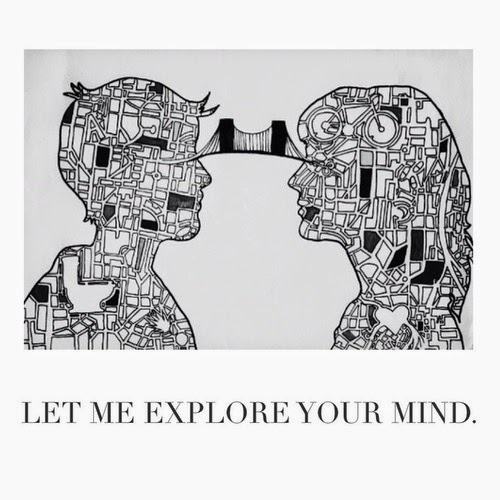 One thing that could be said of both memory and imagination is that each only exist in the mind. Now that could be said of many things (in fact, some would suggest that everything exists as an expression of Universal Mind, but forgive me if I side-step that one for now!), after scratching my head and pondering over what connects the two, I looked into my own mind – and there they both were!

The consideration that I may have to go outside of that mind to find another connecting factor convinced me it was wise to stay put, and further explore this initial discovery.

Essentially, memory and imagination are both processes of thought, the activation of which places a slight veil over our immediate experience, and therefore, reality. This is not to undermine the usefulness of both as tools helping us to live practical and high-functioning lives, but we do not ‘exist’ in our thoughts: rather, the fact that we have consciousness means we are able to think.

Therefore we should not mistake either memory or imagination as conditions of who we essentially are, as the following quotes convey:

“…if you made a mistake in the past and learn from it now, you are using clock time. On the other hand, if you dwell on it mentally, and self-criticism, remorse, or guilt come up, then you are making the mistake into ‘me’ and ‘mine’: you make it part of your sense of self, and it has become psychological time, which is always linked to a false sense of identity.” Eckhart Tolle

“Thus I know that none of those things that I can understand with the help of my imagination is relevant to what I know of myself, and that the mind must be turned away carefully from those things so that it can perceive its own nature as distinctly as possible.” Descartes

Of course, I’m not suggesting that we refrain from the free use of imagination – say, reminiscing about the momentous impact that sliced bread had when it made its debut in the shops, or attempt to inhibit the creative impulse by forbidding Jeremy Paxman to rewrite Harry Potter as a polemic against fascist dictatorship.

What I am suggesting is that when our memory and imagination come together to construct some sort of narrative thread as to what type of person we are, or what other people think of us, this only exists in the realm of thought and does not constitute an immutable truth.

The implications of this are that we are not bound, as Eckhart Tolle says, ‘to a false sense of identity’. Rather, if we allow thought to dissolve back into its source, which is our ever present consciousness, we are eternally born back into the present moment - free of the suffering we may have experienced in the past and with our essential nature undiminished and without the limitations so often imposed through our imagination.

By the same token, if we merely view memory and imagination as tools of thought, to be taken up and dropped as and when they are needed, not as inseparable extensions of our identity, then we are surely free to once again to enjoy our present experience and dwell in our true nature.

This has implications for the way we view and behave towards those people who experience dementia, or other diseases which inhibit a person’s mental function. If a person’s overt ability to think or reason appears to diminish, this does not imply that the essential nature of that person is also diminished.

The disease does not therefore render someone less of a person - and it should not allow for a person to be stigmatized or treated as though they are. Again, if we are able to free ourselves from negative judgements and opinions which belong entirely to our imagination, then we may allow ourselves to act more in accordance with our nature, and instantly reduce the likelihood of someone feeling judged and undervalued.

If we seek to connect with a person on the level of our mutual fundamental nature, rather than our ability to think, reason, and remember, then perhaps we would be closer to sharing in the experience of the only reality that truly exists and not find ourselves so caught up in the ones that we construct in our minds.